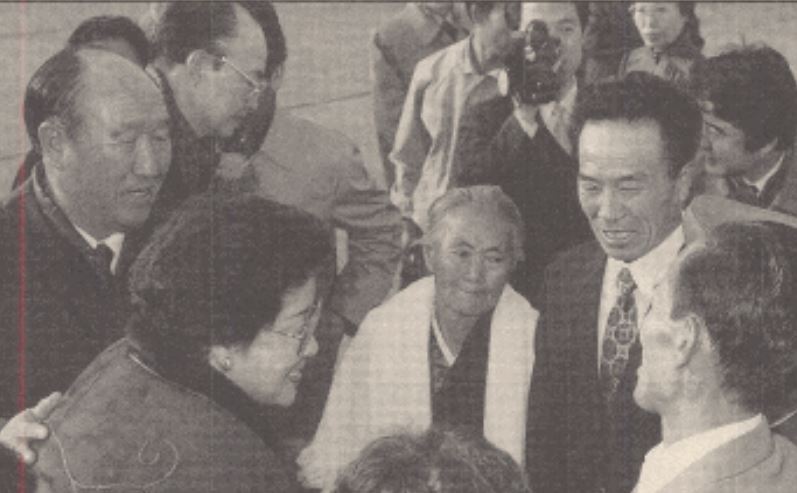 The reunification of the warring brothers on the Korean Peninsula began with family ties. In his speech to North Korea’s leadership in the Supreme People’s Assembly, True Father said “Today when I met with my family I felt not only joy, but also great sorrow. …I thought of the many countrymen and women who will die without having been able to meet their families.”

He and I spoke the same dialect, so we were at ease with one another.

Two days later, when he met Kim Il Sung, they related as brothers. They shared about hunting and fishing, village life in their homeland, and frozen potato noodles. “He and I spoke the same dialect, so we were at ease with one another,” True Father said, “At one point, we each felt we had so much to say to the other that we just started talking like old friends meeting after a long separation. Our laughter echoed around the dining room.”

True Father’s internal goal was to restore family heart. “I …conveyed to him my sincere heart, and built a relationship of trust with him. That is the importance of trust.”

“Guns and swords will not make us one,” Father said to the leadership of the North, “Neither will unification happen with the juche ideology. …The world does not operate only by the power of human beings. …bringing about a unified homeland can be done only with Godism. …What is Godism? It is the practice of God’s perfect love.”

The practice of God’s perfect love by sons and daughters restored Korea to the position of parents—divorced husband and wife with a divided family. America moved from the position of good angel protecting the younger brother to that of elder son protecting his mother. His sacrificial vigilance allowed her to recover.

The North, a husband without his wife, a pawn of selfish cronies, was in a tailspin. His household had collapsed; he was into drugs, oppression and crime, a life of selfish materialism.

The North, a husband without his wife, a pawn of selfish cronies, went into a tailspin.

The South, a wife without her husband, built up her household. With charm and beauty, she prospered but, lacking moral direction, she drifted toward harlotry.

Meanwhile, her husband constantly threatened abuse and rape. The elder son tried to appease his dissolute and dangerous father, to no avail. Finally, in 2017, he stood up to his father: “If you threaten to destroy my mother and the world,” he declared, “I will destroy you!”

What happened next is on the world’s front pages.

A New Nation, Conceived in Love

Rev. Moon called the United Nations to build peace zones. What is a peace zone? A “zone” is simply a jurisdiction, an area in...