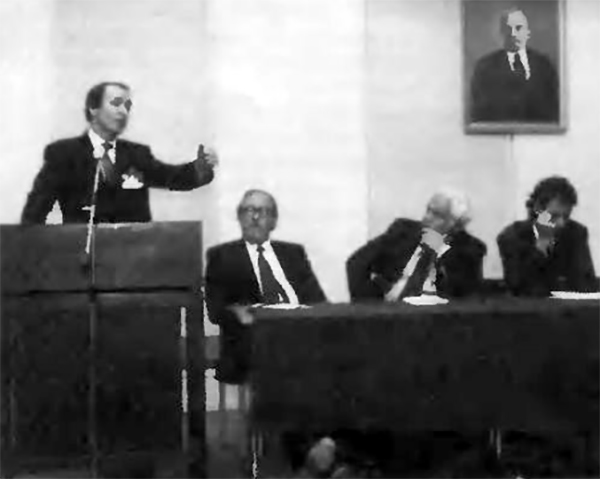 Cheon Il Guk is designed on the model of a perfect individual. The human body possesses a huge information system from the brain to the gut to each cell. The body politic too must maintain a huge information system. In Cheon Il Guk, this is the Cheon Gong Won. This Won manages media, communications, public relations and education. It also collects and analyzes public opinion and conveys the results to the other Wons and to the citizens.

This bare-bones description is all the Constitution puts forth for the Gong Won, and I will surmise its functions on the basis of relevant constitutional provisions.

In terms of education, for example, the Constitution’s only mandate is that all citizens have a right to an education about the Three Great Blessings. This would be the constitutional responsibility of the Gong Won. Beyond that it would support the fulfillment of parents’ Three Great Subjects Thought responsibility to teach their children.

The Jeong Won (executive) is responsible to insure the general welfare. This requires social research, which would be under the purview of the Gong Won in its mission to collect public opinion and duly inform the government and public of its findings. This research should meet the highest standards of objective social science in the context of Cheon Il Guk’s commitment to the unity of the sciences and absolute values.

True Father Moon called this a revolution based on absolute values in the culture surrounding science. He called for a revolution in media as well in his commitment to a self-regulated media guided by absolute values. Building on the work of The World Media Association, the Gong Won would promulgate a public statement of shared universal values based on True Parents’ words, and work with the Eui Won to legislate standards for information and entertainment providers.

The legislature determines the qualifications to serve in the Gong Won, based upon which the True Parents appoint nine members, including a Chair and Vice-Chair(s). Members have four-year terms and may be re-appointed twice.

[Photo: Dr. Thomas Ward gives a critique of Marxism to participants in the World Media Association’s fourth fact-finding tour of the Soviet Union, Oct 24 – Nov 6, 1987. The listeners include Arnold Beichman of the Hoover Institution, and the only place they could meet among themselves was the employees’ meeting and indoctrination room in the hotel basement.]