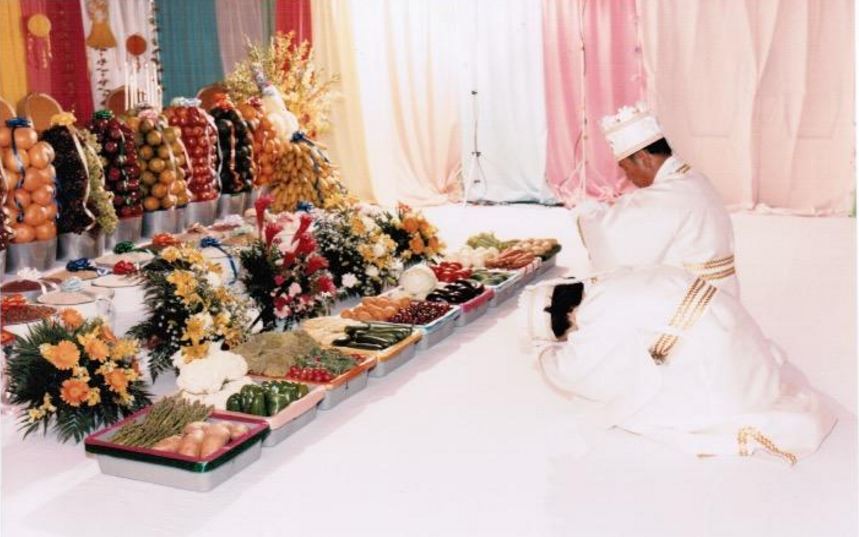 “Suffering is where each individual wants to receive blessing centering upon oneself.“

Children want to receive blessings from their parents, but “A world of suffering [is] where each individual wants to receive blessing centering upon oneself. …If I give to you because you want to receive it, it would not be right. [Some sons say] ‘Father and Mother, I will receive your inheritance.’ Can this kind of person be an honest person? There is the parable of the prodigal son. He receives as he desires and then goes off somewhere. He is going off to squander and waste.”

Even when starving, True Parents did not ask God for blessings. “Because I could not clothe and feed my wife like others, sometimes I would see her groaning in the sick-bed. At such times, … I think of how much misery Heavenly Father’s heart feels when He sees His children go the heavenly way in such a situation, and even if my wife collapses and I fall down, I pray for Heavenly Father’s heart to not be miserable.”

Even when starving for parents’ love, True Parents’ children could not ask for blessings. Their providential position was brutal. True Father prayed that God would not let children in such misery “feel resentment because we can’t feed and clothe [them] now. [Let them] realize it is because You [God] are miserable and let them pray embracing You. Let them know that [their] parents are holy parents.”

“Looking over the far off mountain, we must go forth again.“

This was August of 1971. Four months later, True Parents moved to America.

(NOTES: Don’t worry, Principle also is about grace. We’ll talk about that Monday. All citations in today’s blog are from “The Way Our Blessed Families Should Go,” a message True Father shared with Korean church leaders on August 28, 1971. Twenty years later, in September, 1991, True Father spent a night at UTS, reading this speech from midnight to 4 a.m. True Father directed UTS students to translate it into English and all blessed couples to read it. The citations I’ve paraphrased are on pages 26, 60-64 and 75-6. Father’s all-night hoon dok hae was simultaneous with True Mother’s September 17 speech at the Tokyo Bay NK Hall, Chiba, Japan. This speech, delivered to the Women’s Federation for Peace in Asia Japan Convention, was a transformative event in True Mother’s course.)