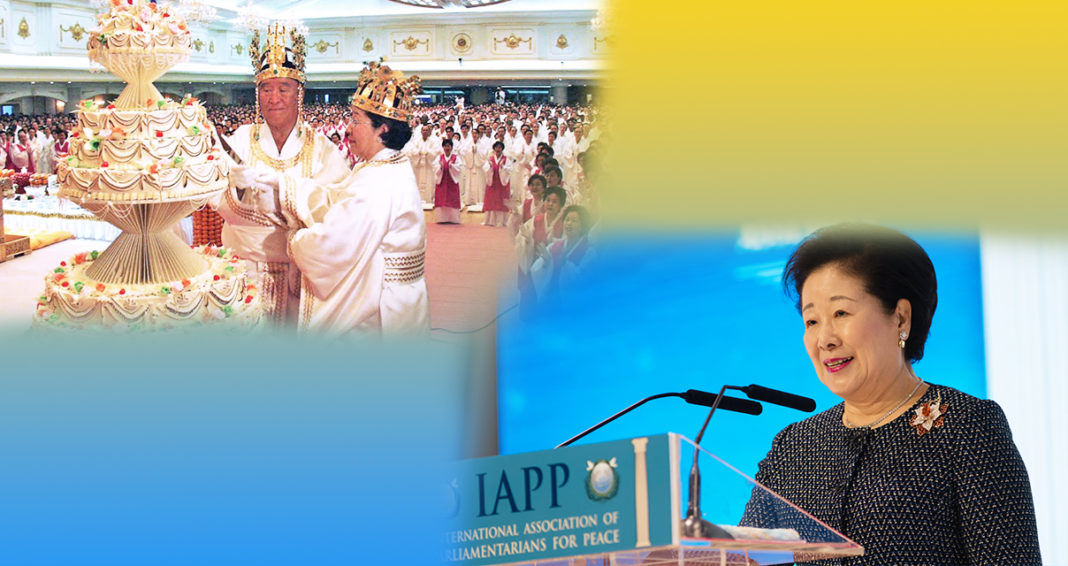 “Representatives of the world, centering on the True Family, bowed to True Parents’ authority of love.“

The Enthronement of the Parent of the Cosmos and the Parents of Heaven and Earth Who Reign over the Blessed Families as the King and Queen of Peace and Unity (February 6, 2003)

The Coronation of True Parents as the King and Queen of Peace of the First, Second, Third and Fourth Israels (2003-4)

The Coronation of True Parents as the King and Queen of Peace on the levels of tribe, nation and world (August 21 – December 31, 2004)

The growth stage, 2005-8, saw the external dominion of love, the Universal Peace Federation and the Abel UN, preceding the internal dominion of love, the Cheon Jung Gung Palace opening. Then at the Hawaii coronation, True Father announced the Pacific Rim Era, the Cross-Cultural Blessing and the Age of Women. He was formulating the content of the Peace Messages, thereafter published in Pyeonghwa Hoongyeong and Pyeonghwa Shingyeong.

Founding of the Universal Peace Federation and advent of the era of the Abel UN (September 12, 2005)

The Cheon Jeong Gung Entrance Ceremony and Coronation of the King and Queen of Peace in Heaven and on Earth (June 13, 2006)

“They established a model national and global system.“

Global governance begins with blessed family life, so in this stage, “True Parents …opened the era of daily life governance on the foundation of the Principle centered on the House of Unification for World Peace.” Then, in the Jubilee Years of 2006-7, they combined family and global governance:

They fulfilled the True Family’s responsibility to educate in the Word on a global tour undertaken by three generations: True Parents, True Children and True Grandchildren. Through this, they established a model national and global system moving in the direction of Cheon Il Guk.

(This is a condensation of the published outline, with my comments. Reference: The Foundation Day printed program, pp. 9-10, “The 12-year Providential Course to Build the Heavenly Parent’s Nation, the Cosmic Nation of Peace and Unity.”)