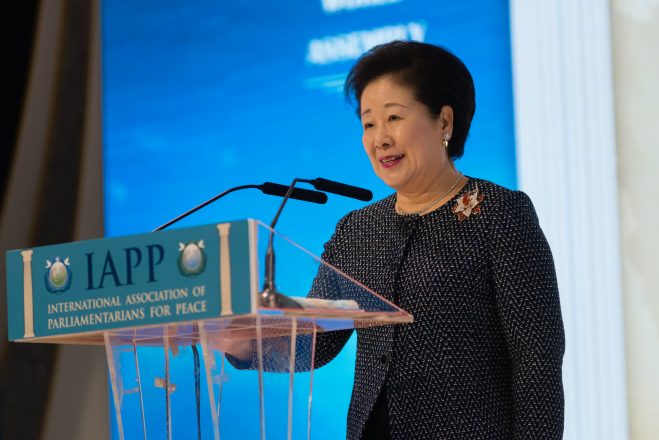 In Washington, DC, November 30, 2016, True Mother opened her speech to American and international parliamentarians with a call to “begin a movement in which our families, our nations and the world attend God, the original Owner of the universe.”

“Do we attend God or not? It comes down to one word: responsibility.“

This sounds enormous, ominous, overwhelming, but True Mother boiled it down to one word. It’s the “R” word. It’s something everyone shirks. It rhymes with freedom. The word is responsibility. That word appears ten times in True Mother’s 15-minute speech. Let’s trace its path.

Our first parents failed their responsibility. As a result,

The descendants of the man and woman who did not fulfill their responsibility cannot come directly into God’s presence.

Who is responsible to rectify that failure? It begins with one person:

God gave humankind responsibility, and from among humankind, a person that can be the True Parent must emerge. Someone has to fulfill God’s providence and God’s dream.

God sent the Jesus, but he could not become the True Parent, because

The people around Jesus had serious responsibilities, and they did not fulfill them.

Rev. Moon urged America to wake up and become a nation responsive to God. Through that, the nation that God blessed at its origin could fulfill its responsibilities.

were reborn. …They understood the responsibility they had to fulfill in response to Heaven’s summons.

Legislators and other leaders in the United States and from around the world …you have an important responsibility.

And what is that responsibility?

Among all individuals, God needs you, the intermediaries who represent the people, to spread forth a movement to attend God in the family, society, nation and world.

“We are responsible to share the universal values behind good governance.“

True Mother is calling those who represent us in government, and calling us to share with them the universal values behind good governance. Let us find those parliamentarians who want to take this responsibility, and liberate them to unite across the globe.

(Notes: On Nov 30, 2016, at the Kennedy Caucus Room of the Russell Senate Office Building, True Mother Hak Ja Han Moon presided over the global launch of the International Association of Parliamentarians for Peace (IAPP). This culminated and continued the series of IAPP launches in Asia, West and East Africa, Europe, Central America and South America. True Mother spoke on “The Providence in America and the Role of Representatives.”. The photo is from True Mother’s speech to an international IAPP gathering in Seoul on Feb 6, 2017.)