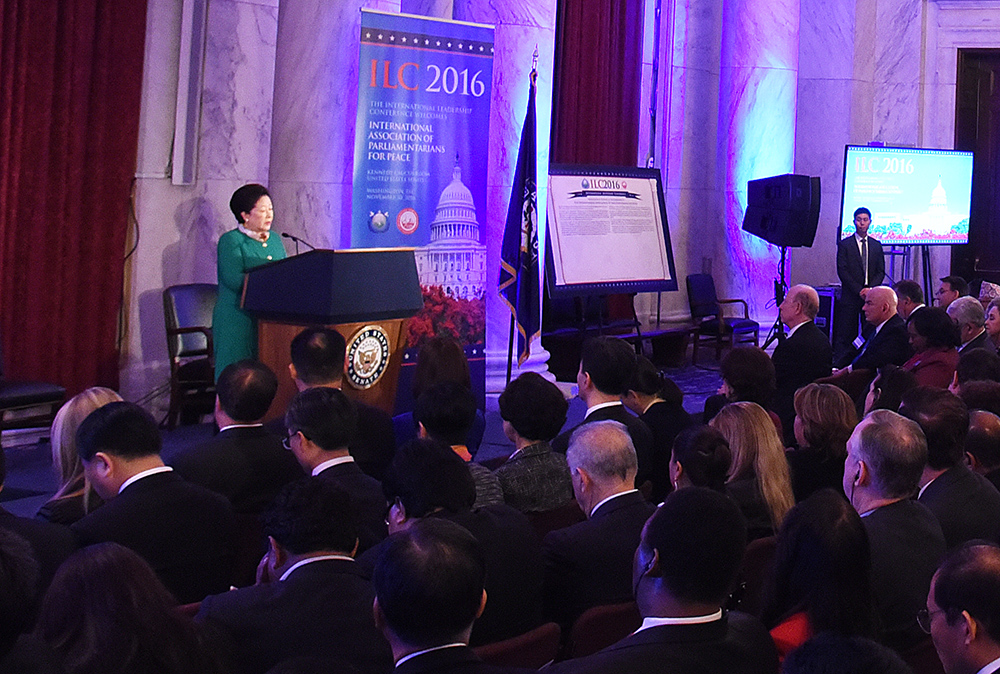 When American founding father John Adams referred to “the noblest and most generous affections of our nature” upon which government should be based, he did not include filial piety.

The immediate cause was the Americans’ experience with their mother country, England. In the course of human events, Americans had ceased all filial affection for her. Adams said this “radical change” was “the real revolution.”

America renounced its former mother because it was seeking the True Father, and only the True Mother takes you to him. Until he appeared, we were an orphaned nation, trusting providence, government and the dollar.

“America renounced its former mother, because it was seeking the True Father“

Providence sent the True Parents in 1971, and what happened?

On November 30, 2016, speaking to members of Congress in Washington, DC, True Mother testified that True Father came as the Savior, and America persecuted him:

Nonetheless, how did America treat Rev. Moon? Ignoring Rev. Moon’s sacrificial investment in The Washington Times, they falsely accused Rev. Moon. …How could they send their Savior to prison?

She affirmed the True Parents’ way of forgiveness: “Because they are the True Parents, they forgave and worked to save this great nation of America.” She affirmed readiness to forgive more, knowing that our hearts want to “begin a movement in which our families, our nations and the world attend God” but that “it is difficult to put it into practice.” A true mother forbears sin as immaturity.

True Mother testified to True Father’s love for America: “Most Unification Church members at that time had once been hippies. Rev. Moon was able to pull the heartstrings of good America families. As a result, young people in America were reborn.”

Beyond families, True Father loved the nation and world:

By that time, within the Christian culture, communism… had reached America’s shores. …If America had remained in that defenseless state, there would be no America as we know it today. … Rev. Moon nurtured The Washington Times and informed America through it. …Rev. Moon did this because he hoped that America, from the viewpoint of Heaven’s providence, would survive and become a nation that would achieve God’s dream.

Now comes the hard part, the listeners’ unity in God’s dream. America fell short in the past. The opportunity appears again, embodied by our Father in Heaven and our Mother on earth. What is that dream? True Mother told them clearly, and we’ll discuss it on Wednesday.

(Citations from Dr. Hak Ja Han Moon, “The Providence in America and the Role of Representatives,” Nov 30, 2016, Washington, DC, and John Adams, Letter to Hezekiah Niles, February 13, 1818, in Thoughts on Government. The photo is from that event.)