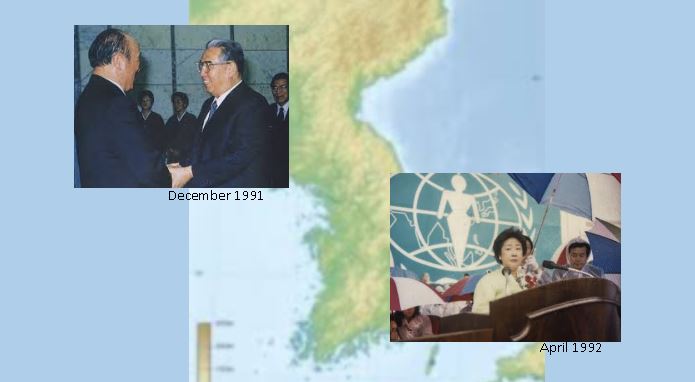 God’s true love, substantiated in the family, is the universal principle of peace, for the world and for the Korean Peninsula.

In True Father’s words, “The basic principle capable of unifying North and South Korea begins with true individuals who have achieved mind-body unity, and who come together to form true families. Only then can that principle be applied to unifying the Korean Peninsula.

When the Parent nation rejected the Messiah, providence divided it into North and South.

“When that principle is extended to the world level, it becomes the principle for realizing true freedom, true peace and true happiness. The unification of the Korean Peninsula, therefore, will provide the opportunity to realize a united world and, eventually, even bring about the unity of God and humankind.”

In God’s providence for the Second Advent, Korea is the parent nation and, in relation to other nations, the father, or Adam, nation.

For decades, Cain and Abel struggled on the peninsula, dominated by angelic nations, Cain-type and Abel-type. The Cain-type angels were Communist—the Soviet Union and China. The North dreamed of an eternal kingdom, centered on “the eternal sun of mankind.” The Abel-type angels were Christian. In Father’s words, in the South, in 1955 “I had stirred up the nation. They had to accuse me of being an evil man and a traitor to the Korean people and grab hold of me, because they believed that only by doing so could their kingdom of the Christian church go on for thousands of years more.”

By receiving True Parents, Korea became the Parent nation. But they were divorced parents.

True Father survived prison both North and South, went to America, and won the support of Christianity, and the support of all religions, at the cost of Danbury prison.

But they were divorced parents, the father in the North, the mother in the South. More on Monday.