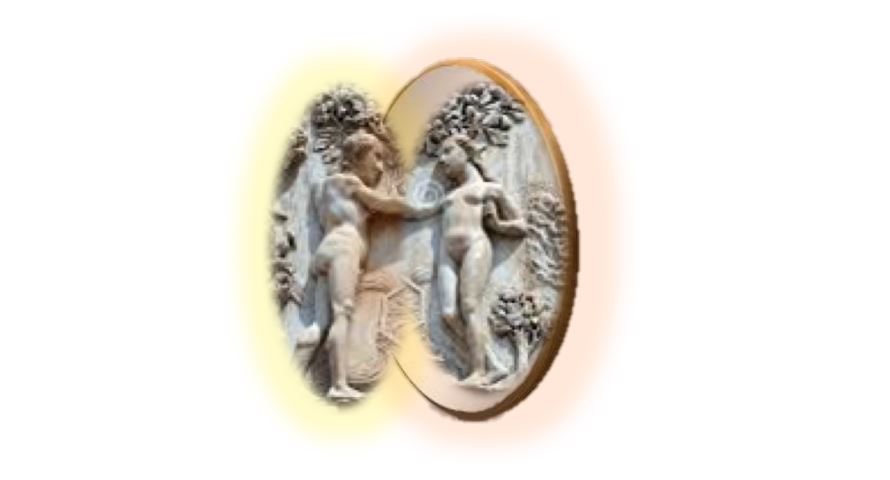 Adam grew in the womb of his Heavenly Mother, at play with animals and angels.

Women only go in one direction, but men go in three and four directions.

As his body matured, Adam enjoyed newfound strength every day; he could run faster, climb higher, dive deeper. Eve’s growth made her softer, rounder, gentler. Adam named things while Eve understood their character and relationships. Adam was impressed by males leading the flocks, Eve by females birthing and caring for the offspring.

It was Eve who began to sense what was to come. And it was Adam in whom something unprecedented happened: an emptiness appeared.

Having never seen it, all that one grasps is a shape that is empty, negative space.

Adam experienced what God did in the beginning—love’s longing. “Love,” Father said, “is the power and desire to unite.” In that very longing, the beloved exists.

By love’s longing, the beloved becomes that than which nothing greater can be conceived. Since what exists is greater than what does not, it exists. God’s entire Being is love, so that existence is God’s entire Being.

Adam looked up and saw Eve. He realized that she was what had been missing—beside him all the time!

This was a transmutation of Adam’s longing for God, for, in True Father’s words, “man and woman miss each other because through each other they can possess God.”

Man and woman miss each other because through each other they can possess God.

Adam was flush with purpose, to be one-body with Eve. And that purpose centered on the part of Eve’s body that was different from his, that in fact was its complementary opposite. That was the fruit of Heavenly Mother’s creation that Heavenly Father said not to eat.

Now what does Adam do? To answer that, we pursue Eve’s side of the story, as the flesh of his flesh, bone of his bones. And here we encounter our subject matter: pornography.

(Citations: Blessing and Ideal Family 1993, pp. 35, 33, 43. The “that than which nothing greater can be conceived” insight is St. Anselm’s argument for God’s existence, called the “ontological proof.”)