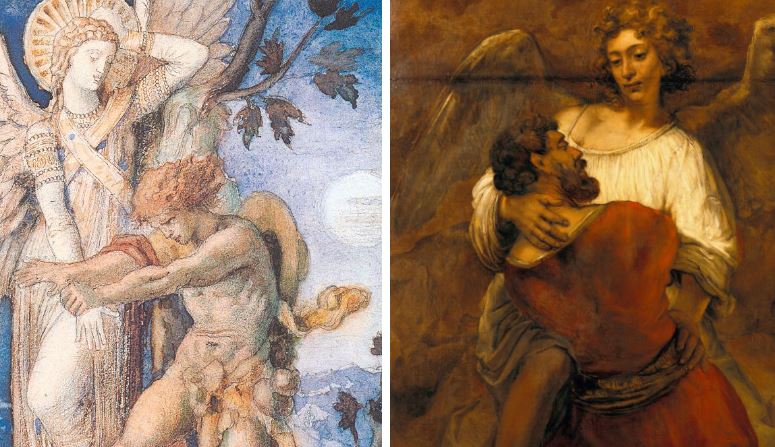 Eve’s sexual relationship with the archangel weaves deeply into the story of the Fall. Let’s start to unpack it.

True Father describes the character of the angelic sphere as feminine.

God conceived the universe and human beings as His feminine object partner, and the first step was “the creation of the angelic sphere …Then God, together with the angels, created the substantial objective sphere, the physical world of all things.”

The angelic sphere’s servant position has a feminine character: “God made angels to stand in the position of object partners, admirers, and consultants. …angels as God’s object partners gave gratitude and stimulation to God, so that God received joy in the process of creating man. …the archangel gave Him praise and comfort.”

And yet, God’s creative work was masculine, so the angels were male. At creation’s completion in Adam and Eve’s Blessing, God would rest on earth and female angels would appear, not to glorify work, but rest, not pioneering, but settlement, not going out, but coming in.

In the realm of the Fall, male angels in a feminine position leads to a terrible distortion.

Consider another male in the feminine position: the second son. He is born the assistant, the understudy, the follower of the first.

Consider that Esau, a “hairy man,” was “a skillful hunter, a man of the open country,” while Jacob, of “smooth skin …was content to stay at home among the tents.” Jacob’s success arose from his ability to cook, to obey his mother and to submit to his uncle.

And his next words are pregnant with meaning: “Then why did God create Eve?”

This is crucial to understanding pornography and same-sex attraction.

(Citations: Exposition of Divine Principle p. 62; “Lucifer and Adam Have the Same Father,” July 13, 2010, https://www.tparents.org/Moon-Talks/SunMyungMoon10/SunMyungMoon-100713.htm; “Why We Have to Go Through Hardships,” in God’s Will and the World, pp. 114-16; Gen. 25:27-34, 27:6-15; Exposition of Divine Principle p. 227. The artistic renderings of Jacob wrestling at the ford of Jabbok, as depicted by Rembrandt (right) and Moreau (left), reveal the femininity of the adversary, called in the Bible a “man” but understood to be an angel, and the sexual nature of the struggle. Note: For the God’s Will and the World passages, I have updated the English term “object” to “object partner.”)