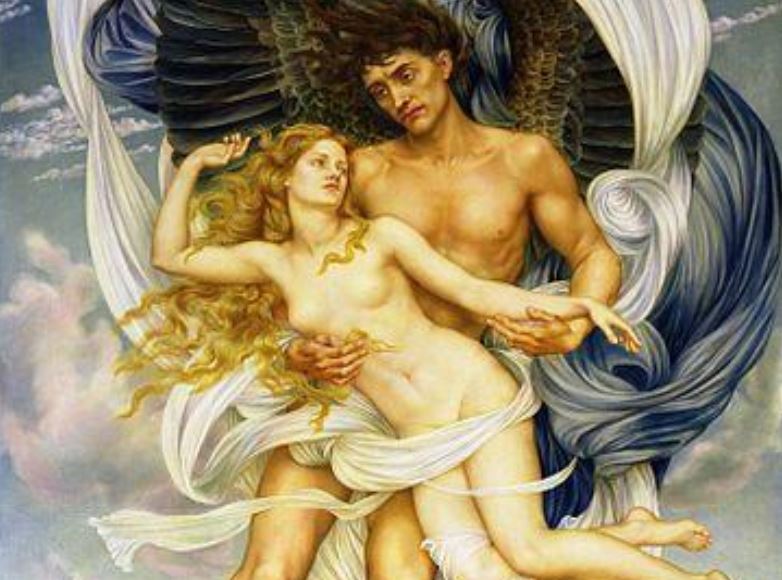 Lucifer was the lead servant, pre-eminent among the angels. Despite, or perhaps because of, his lordship over his fellows, he took Adam’s joy as his deprivation, God’s pleasure over Eve as God’s displeasure with him.

The basic angelic work was done, and now came the last straw, to glorify God and impart his ideal of loyalty to God’s children. And he did so, reverently, until they became teenagers. Then something he had never seen appeared: the image of a female angel, the vision of his future counterpart, the blossoming Eve.

He had to glorify God and impart his ideal of loyalty to God’s children.

He spent his time mostly with her. They left Adam on his own. Although “the other angels near Adam and Eve should have protected them …and not given the Archangel Lucifer the opportunity to cause them to fall,” no one could break in. “The good archangels Michael and Gabriel could not intervene. Even though he was fallen, Lucifer was still boss. The junior members could not speak out.”

Eve could have included Michael and Gabriel, but she did not; she was infatuated. The more she responded to Lucifer, the brighter was his light, the stronger his grip, and the more intoxicating his self-possession. Self-possession turned into pride, pride into arrogance, and arrogance into self-delusion. With Eve in awe, he realized he could become God.

He knew that to become God was to become physical and visible, that “not only were the angels to follow Adam in his growth; even God would follow Adam.” And he knew where God would “appear and meet” them: “at the place where husband and wife unite through their sexual organs.”

Lucifer’s love was shallow and servile, and now in service only to himself.

God would never jump into that place. Heavenly Parent honors “the conditions by which that larger union can come about.” That condition is marriage. Marriage is “the formula” because “man and woman need to become absolutely one. …absolutely one with God, loving God and living and dying with God.” Without that oneness, “the kingdom of heaven that God desires is empty.”

Lucifer did not care. He was now on a mission. Love sparked his affair with Eve, but that love was shallow and servile, and now in service only to himself. It was an implement in his toolbox, part of a calculation. His interest was only to weaponize the Principle centering on himself, even if it meant to divert love’s flowing waters into a desert of egoism. He targeted Adam and Eve’s reproductive organs. Lucifer weaponized sex.