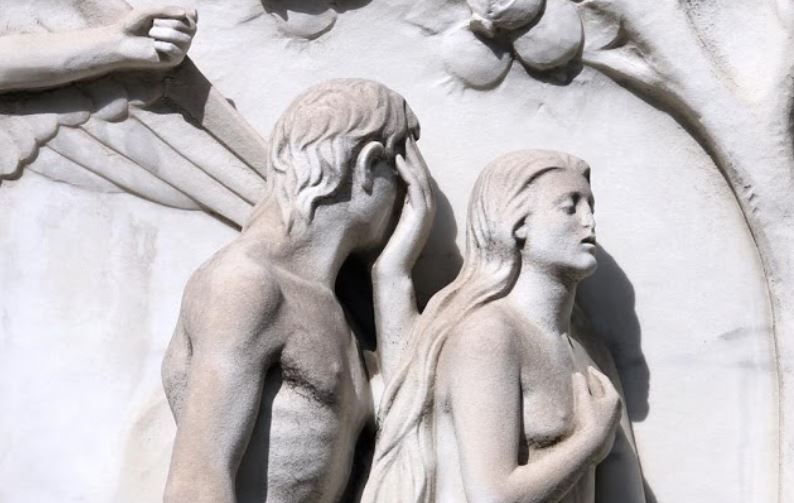 Lucifer lacked a male reproductive organ, but could occupy Adam’s. He was infatuated with it and the power and pleasure within it. Possessing it, he could pretend that he had one. This is the origin of same-sex attraction.

As Adam came under Lucifer’s shadow, his spiritual growth stopped.

As Adam came under Lucifer’s shadow, his spiritual growth stopped. He had had “some ability to converse with God,” but sank into “ignorance of and insensibility to God. …He could no longer receive the Word of God directly.” His spiritual senses became “as dull as those of animals,” dominated by guilt and lust.

Satan twisted Adam’s body, centered on his sexual organ, into an instrument of insensitive and selfish abuse, especially of Eve. Adam’s very cells screamed in pain, as a hideous archangel clawed into their intricate and delicate world, the center of the cosmos, subjugating their very devas. Adam and Eve “united with Satan and became his dwelling places” and “could not feel each other’s pain and suffering”

The angel captured the sexual organ first and from there wrenched Adam’s entire body into contortions. Adam’s conscience was left twisting in the wind, trying to breathe, holding on to God, but even from God, he could feel only pain. The very thought of the Commandment drowned him in self-accusation. It became a rod of iron with which the angel beat him. Satan tempts us to sin and then accuses us for sinning.

Angels cannot touch, taste or smell the natural world; to them, it’s like a photograph. For the evil angel, the photograph turned pornographic. Inheriting this, Adam related to Eve as to pornography, an external image he helplessly worshiped. His experience of love was like eating a photograph.

Lucifer, in turn, was eating dust. Not even dirt—dirt has life in it. It’s dust—lifeless, meaningless, evil vitality elements. Satan had “to subsist on evil elements gleaned from the sinful world.” The photograph looks like food, but tastes and feels like dust, and it leaves one filthy.

The only good that was left was their faint memory of Eden.

Adam and Eve’s immature spirit and flesh never became one. “Evil blood” permeated their being, dominated their emotion, held heart and intellect captive. They were insensible to the original internal nature of all things, including their own bodies. The invisible and visible worlds could not resonate. Discord reigned.

The only hope that was left was their faint memory of Eden. That faint memory still lives in every human being, buried in trauma.