I have introduced the three essential responsibilities that, due to the Fall, became three indemnity conditions. We will see how these weave through history and shape our salvation in True Parents today.

Our topic today is predestination. Are the only begotten son and daughter predestined? The answer is yes, according to the Divine Principle definition of predestination.

In fact, God predestines the ideal of every person on the basis of their nation, lineage, education and training, personal character, and time and place in the providence. The predestination to be the only begotten son or daughter includes something unique: the fulfillment of the three indemnity conditions.

“Our True Parents were born on the foundation that God is the child’s only Parent. “

Those whose parents meet these conditions are born sin-free. The parents of Jesus and his would-be Bride, and of our True Parents, stood on that foundation. God was the child’s only Parent; Satan had no condition to claim their birth. On this foundation, blessed couples give birth to sin-free children, one substance with God. As True Mother stated to a gathering of second generation, “Your essence is True Parents.”

In other words, a person’s predestination appears in their accomplishments. The proof is in the pudding. Jesus taught that the tree is not known until it bears fruit. I call it “postdestination.” You don’t realize it was predestined until it happens. And it happening depends on your 5%.

“One becomes what one was predestined to be by fulfilling one’s 5%. “

The next verse in Acts honors the fruits of the fulfillment of human responsibility: “Salvation is found in no one else, for there is no other name under heaven given to mankind by which we must be saved.” So too we honor our True Father, who fulfilled his responsibility to rebuild the house on Jesus’ cornerstone and welcome the Bride.

The legend of King Arthur and parable of the virgins teach us more. To be continued…

And am I the only one who notices the similarity between the following photos? 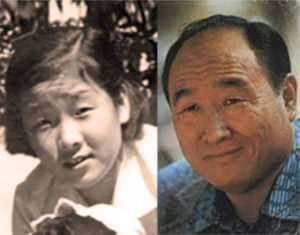