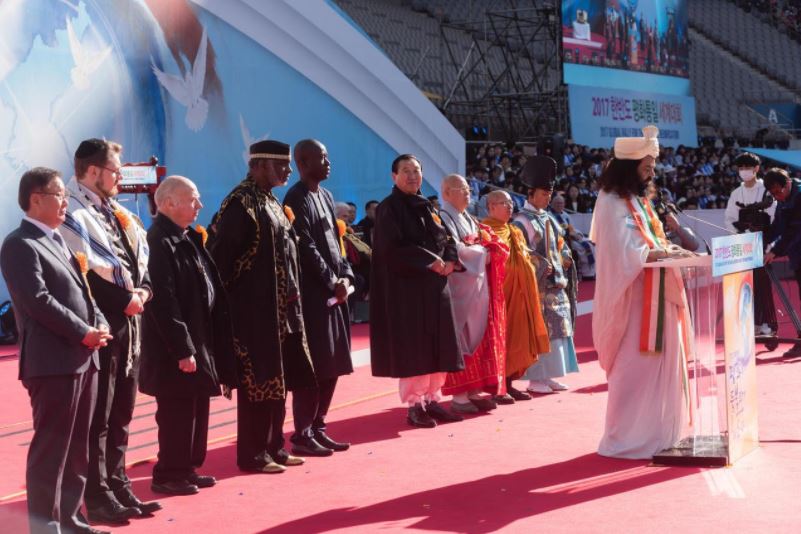 Father and Mother Moon hail from villages 18 miles apart in what is now called North Korea. The communist takeover of the North left them refugees having nothing but heart and faith. Over the decades, the seed of Kingship and Queenship that God planted in them blossomed. With it blossomed a global nation, which True Father called “the mother country that God, Jesus, and the Holy Spirit have wished for.”

On November 11, 2017, the mother country filled Seoul’s World Cup Stadium with oneness. According to The Washington Times, “prominent figures from Christianity, Buddhism, Islam, Judaism, Hinduism, Confucianism, Sikhism, Shintoism, Jainism and Bahaism” prayed for global change. Behind the scenes, “Jewish leaders could be seen exchanging ideas with Muslims. Buddhist and Hindu priests snacked on cookies …Christians of various denominations mingled with each other.

True Parents’ way to bring oneness is the way of sacrifice and compassion.

But this sacrifice springs from compassion. When “the established church members protest against us and even persecute us, …we must not repel their power or deny them, but be compassionate toward them and try to win their hearts, and finally unify them into our group to reach out to the ends of the earth. …We must strive to go ahead, drawing the people into our group with compassionate hearts and love.”

Not to repel one’s enemy, not to deny others, but to extend compassion and love.

On November 11, that march of sacrifice and compassion sent a message across the Korean peninsula and to the world. We’ll talk about that message next week.