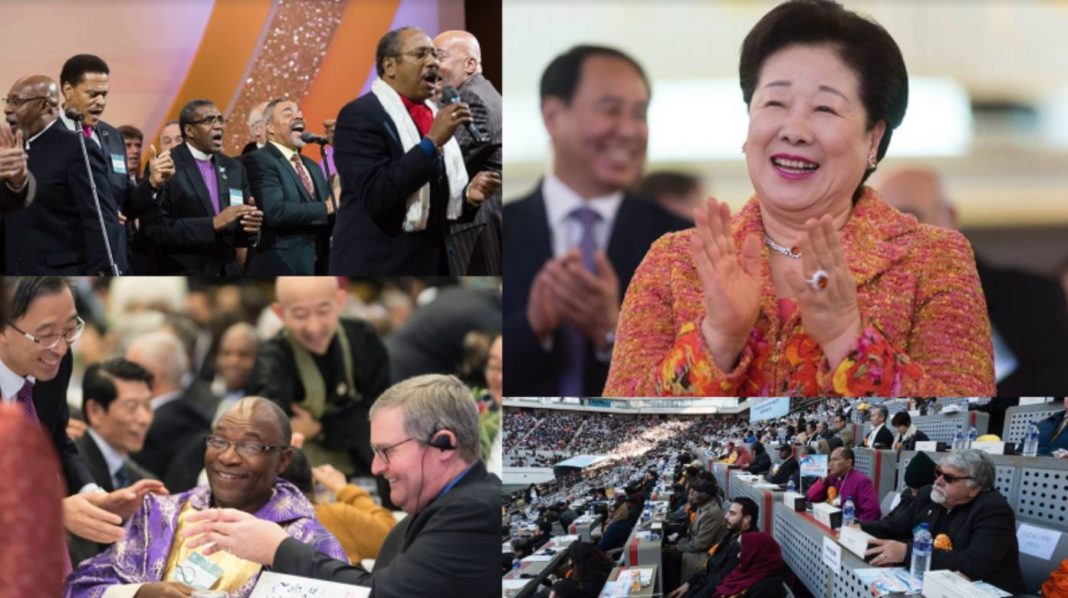 To the crowd of 80,000, with interfaith clergy at the center, True Mother testified to True Father and True Parents:

“The numerous leading religious figures and believers …must prepare to greet a new day. Are you prepared to meet the returning Lord who, two thousand years ago, said he would return as he died, that is, on the cross?”

“You must be reborn through the True Parents to become a child of God.”

To give context, True Mother told them that Adam and Eve were the seed planted in the evening of creation. They were to pass through “the night” of their growing period in the Garden and emerge as the True Parents, because “Heavenly Parents’ dream, and what humankind wishes for dearly, begins from the True Parents.” And she repeated, “The True Parents!”

Are you prepared to meet the returning Lord?

But Adam and Eve never achieved the maturity necessary to be True Parents. “Their self-centered greed caused the world we see today, a world of fallen humankind.”

By the time of Jesus, humankind had the maturity necessary to be True Parents, but was unable “to enter God’s presence directly, because human beings must indemnify the mistakes they have made.” We needed God to send victorious ancestors to “help us fulfill that indemnity.”

That’s when God sent Jesus, “the one whom He could finally call ‘My Son’ …to become the True Parent, the victorious human ancestor.”

Rejected and crucified, Jesus could not join with his Bride to become True Parents. Therefore, “He said he would return.” Return for what? “…return to hold the Marriage Banquet of the Lamb.”

True Mother declared to the religious leaders, “Today, Christianity—all religions …must prepare to greet …the marriage Blessing through True Parents [and] the true family movement.”

When you grow up, you also have to follow your mother’s way.

The Blessing will unite Korea. True Father once envisioned that “Korea will be the place of Blessing. Since Korea is so small, they will be able to do nothing else there but bless people.”

And Father centered this on True Mother: “When you grow up, you also have to follow your mother’s way. Centering on the mother, the father and son, and the father and daughter, have a tearful connection of heart. Then this family can inherit the mother’s tradition.”

To the 80,000, True Mother expressed the mother’s tradition: “Let us fulfill our duty as filial sons, filial daughters, and loyal patriots, …receive the Blessing, …and open the way to the future.”