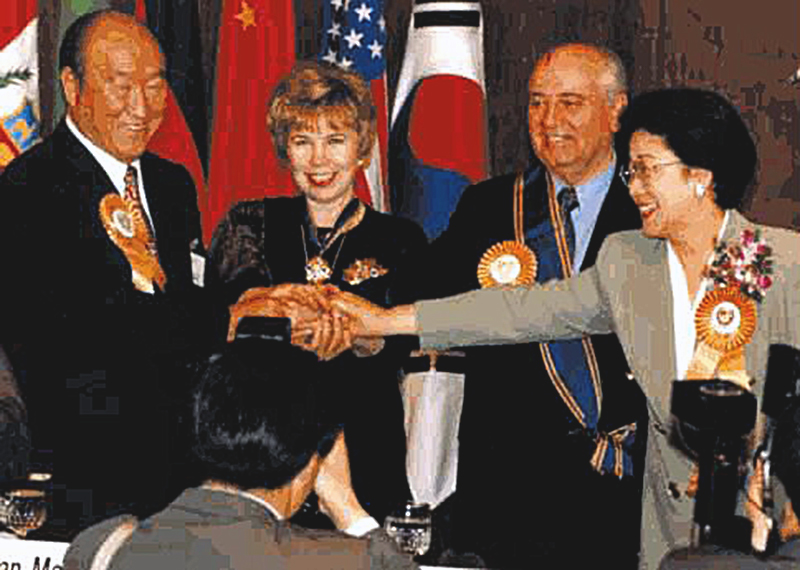 In True Parents’ internal providence of 1989-91, Cain surrendered, Eve was liberated, and the parents were elevated, with husband and wife in equal positions. External events followed suit.

The Berlin Wall fell. True Parents conducted the Moscow rally and won the heart of Mikhail and Raisa Gorbachev. They returned to their hometown to preach Godism and win the heart of Kim Il Sung. Through core Islamic leadership they counseled the Muslim world through the first Gulf War.

True Parents thus set the foundation for interreligious peace, a color-blind society, and co-leadership by men and women balancing Left and Right. Prior to 1991, True Father supported the Right. After that, he did not voice an opinion. In 1991, the Clintons won the presidency. Mr. Clinton signed National Parents Day into law and cooperated with conservatives in Congress. True Parents invested people and resources into Eastern Europe, Russia, China, North Korea. We entered the age of Headwing.

We have not yet inherited True Parents’ victory. The culture war between Left and Right persists, and it is serious. What is to be done? Here’s a Principled take on it.

In the children’s age, the elder son, who has authority over the external world, is dominated by the fallen angel’s complaint over a lack of love. This complaint drives resentment that tells us we are victims of oppression.

As victims, we protest injustice according to any criteria: race, ethnicity, economic status, gender, the environment. The ideal of justice centered on God, a good, is transformed into a demand for justice centered on my class, my people, my sex, me.

The culture war between Left and Right persists, and it is serious.

Now, who proclaimed himself the original victim? True Father discovered that it was Lucifer. He was creation’s most powerful angel, but he decided he wasn’t getting the love he deserved. In the Fall, this victim turned into a villain. He convinced the woman that she also was oppressed, and came to rule the world through the elder son, Cain, who wrought justice through murder, left his parents, and built the first city.

All of this illuminates what True Mother is doing today.

(Credit: The photo is from https://www.tparents.org/Library/Unification/Books/40Years/40-5-04.htm. It is part of a valuable summary of True Parents’ visit to Moscow.)