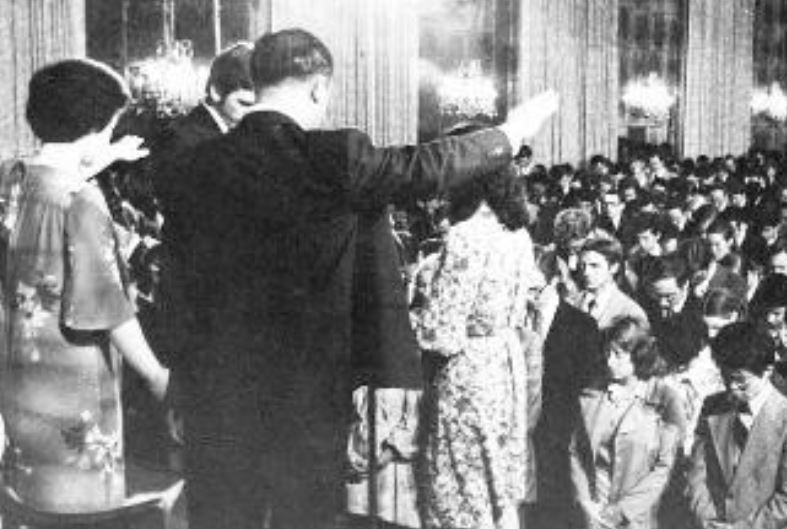 We are working through True Father’s five-sentence “heretic and destroyer” statement, and have reached the final two sentences.

The King of Kings is one being, God, and the True Parent is one person, one parent.
The people of ten thousand generations are likewise the citizens of one lineage, and the children of one Heavenly Kingdom.
The headquarters of cosmic peace is also one absolute and unique headquarters.
Its representative body and heir is Moon Hyung Jin.
Any other person is a heretic and destroyer.

The first three sentences declare the oneness of God, True Parents, all people, and the headquarters of cosmic peace.

With this in place, True Parents addressed a temporal matter. Their third son, Moon Hyun Jin, who had been the headquarters’ representative body and heir, had separated and was claiming True Parents’ ownership and authority. While longing for his return, True Parents appointed to the office their seventh son, Moon Hyung Jin. As such he was to assume the mantle of headquarters’ representative body and heir.

The mantle of headquarters’ “representative body and heir.”

In that hour, True Parents stood with the heart of Moses before Israel: “I call heaven and earth to record this day against you, that I have set before you life and death, blessing and cursing.”

Fulfilling the office brings an unparalleled blessing worthy of a “representative body and heir.”

Violating the office brings an unparalleled curse worthy of “a heretic and destroyer.”

With this seriousness, True Parents announced the transfer of the office from their third son to their seventh son. They bequeathed to Moon Hyung Jin the responsibility to represent the one absolute and unique headquarters of cosmic peace.

What was written was True Parents’ shared statement.

As the one who is blessed above all, their son also was the one responsible above all to lead all people to victorious tribal messiahship, and to mediate the offering of all people to True Parents.

What was written that day was True Parents’ shared statement, prepared in oneness. We are reminded of True Father’s words on the oneness of husband and wife:

“Even though a husband tells his wife not to intervene in his business, should she not intervene at all? A wife can stand as equal in position to her husband. If the husband is absent, his wife should be able to replace him.”

True Father did not tell True Mother not to intervene. They conversed and made clear the statement’s meaning. A few minutes of their sharing was captured on video. We’ll discuss that on Friday.