Search
Home True Parents' History and Ministry An Introduction to Dr. Moon A New Thing on the Earth 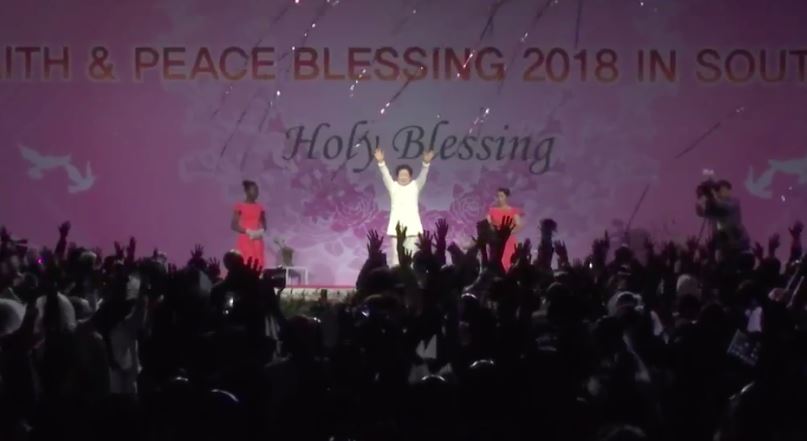 “In the course of history a perfect woman who is connected to God’s love absolutely must emerge. She must join with the perfect man who lives in oneness with God’s love. She is able to stand as the Bride of the Returning Lord, who comes as the Bridegroom.”

“Jesus’ purpose in coming again to the earth is to find his bride, …That woman must represent Christianity, attend the Lord as her bridegroom on the world-level stage of Christianity, and marry him.”

“It is True Mother’s work to reach the world level; then the work must be expanded horizontally. That is why Mother is traveling and being proclaimed throughout the world. It is because every human being must return to True Mother’s womb and become one with True Father, like the joining of ovum and sperm, and be reborn.”

A perfect woman who is connected to God’s love absolutely must emerge.

And how is this rebirth accomplished? Through the Holy Marriage Blessing.

In her November 12, 2018 appearance in New York, Dr. Hak Ja Han Moon stated that God blessed America “because it could lay the foundation for the returning Lord.” The United States has one providential purpose: to receive True Parents and advance the marriage Blessing movement worldwide.

Until the mid-1950s, America sacrificed for the world. But then it lost direction. “This nation was in a crisis in the 1970s,” Dr. Moon declared in the Nassau Coliseum. “There were threats from the communist party, and an uncontrollable dilemma of family breakdown, adolescent corruption and cultural decay.”

True Parents “came to this country as doctors to treat its ailment. We came as firefighters to put out the fires [of] family breakdown. For the sake of this country, which …could have been communized, we …founded The Washington Times to educate the government and the citizens.” Through True Parents, God restored faith, family, and freedom. The Washington Times was founded not for money, but to save the people, nation and world.

The Christian cultural sphere must no longer cling to the past.

Then Dr. Moon warned, “You must not become people who forsake that grace. …The Christian cultural sphere, must no longer cling to the past but needs to …take part in the new era and a new history.”

True Mother is creating a new era, fulfilling True Father’s words and Jeremiah’s prophecy: “For the Lord creates a new thing on the earth: a woman protects a man.”

Does a Woman Make a Man More Complete?

Fulfilling the Mission of the Bride