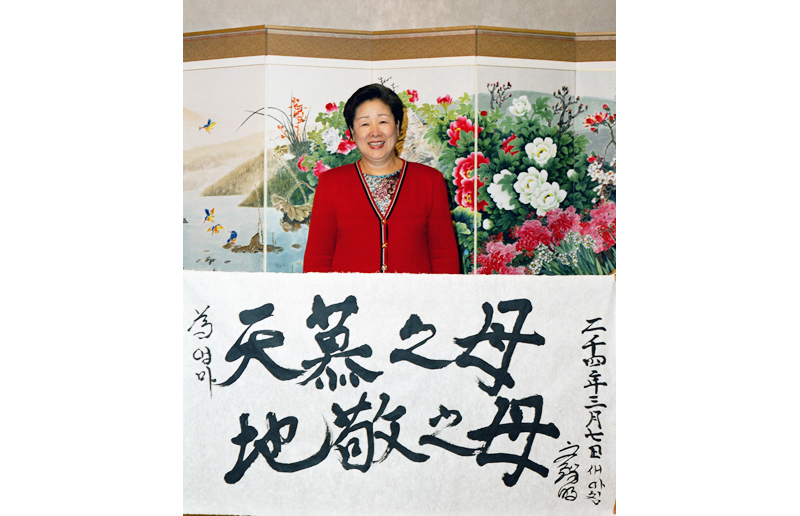 God’s providence required that True Parents end women’s resentment of men. Fallen history records the world bowing to triumphant men. Abraham Lincoln said that all he was and ever hoped to be, he owed to his mother, but who else honors her? The Bible introduces a few triumphant women to whom a man bowed—Tamar, Ruth, Esther. In the New Testament era, believers bow to the Holy Spirit and Mother Mary.

One step was to end women’s resentment of men.

True Father completed this providence. On March 7, 2004, he gave to Mother the calligraphy in the photo above,

He explained, “It means that God, who is in heaven, will appear on the right in the form of Father and Mother will stand next to Him.”

Later, he explained more: “Cheon-mo-ji-mo is the mother that Heaven longs for and admires while Ji-gyeong-ji-mo means the mother that True Father reveres. …The Chinese character “gyeong” is the same as attending Father. Hence, you must attend Mother in the same manner you attend Father on earth. Ji-gyeong-ji-mo! Just as you love and yearn for God in heaven and on earth, you must also love and yearn for Mother.”

I wasn’t able to fulfill my filial duty to my mother.

“What is the morning of March 7, 2004?,” Father asked, “This is when I said, ‘Omma, I wasn’t able to fulfill my filial duty to my mother’.” He repented for being “the most difficult son to raise,” and asked for mercy: “Hence, if I call, ‘Omma!’ In the middle of the night, please do not resent me for calling you such, but answer me in the same manner in which I called you and please take on the role of my mother.”