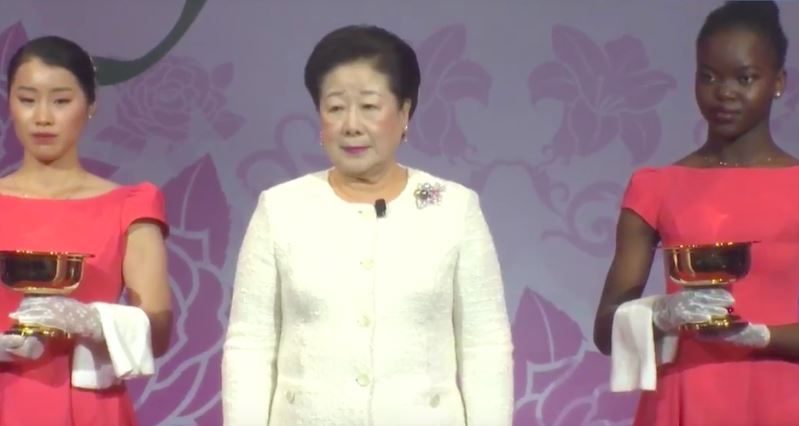 True Father discovered God’s plan for the position and mission of the True Mother, and he established his bride in that position publicly in the early 1990s. He had completed the course of restoring the elder son’s position on eight stages, and True Mother had completed her course of bearing 14 children. Among his many words about True Mother at that time, we find these:

Mother is the center of all of our activities.

“Mother is the center of all of our activities and we must follow her. By the year 2000, we must all cling onto Mother’s effort towards humankind so much. Especially after the successful education of Japanese women, 160,000 in all, Mother now has the unswerving foundation in order to be recognized throughout the world. We must bear in mind that this is Mother’s time and the countries of Japan, Germany and America will follow in Mother’s wake. Now Father expects Mother to focus on the unification of the youth of North and South Korea. Father encourages Mother to work wholeheartedly for that purpose. Father extends all the privileges to Mother. In the absence of Father, Mother will take all the power of Father and complete this mission. That means that whenever Father is not here, Mother is equivalent to Father.”

Completing the global mission, according to True Father’s words, the woman Zimbabwe’s President Mnangagwa proclaimed “the global Mother” is gathering the world’s religious and political leadership. She is calling them to receive and multiply the Holy Marriage Blessing, and to establish True Parents’ Blessing as the global cultural norm.

In New York last month, Dr. Moon designated the assembled clergy the “owners of this nation” who are to inherit the essential ministry of Jesus and the Holy Spirit by becoming true parents to their churches: “Owners should raise their children well by standing in the position of parents. Your children are your church members to whom you minister.”

You would even be able to influence the president.

She called them “to multiply blessed families,” by which God can transform history in “the fastest way.” She cast a clear vision: “What would happen if all [America’s] citizens were in blessed families through the true family movement? You would even be able to influence the president.” And she put the power in their hands: “Therefore, in regard to Heaven’s providence, you are the very people who can determine how to advance and to act accordingly!”

(Citations: “Who Are the Parents of Heaven and Earth and the Unified World?” November 27, 1994, Belvedere, International Training Center, https://www.tparents.org/Moon-Talks/SunMyungMoon94/941127.htm; Dr. Hak Ja Han Moon, at the Nassau Coliseum and Long Island Marriott, Uniondale, NY, November 12, 2018, and at East Garden the following day.)