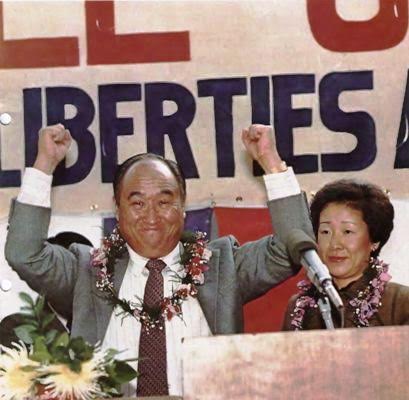 The Realm for the Liberation of Women

Before I declared the era of the liberation of women, Mother simply followed me. Because Mother was united with me in everything I did, my victories were also Mother’s victories. However, we had not yet overcome the final obstacle in Satan’s world. To completely overcome Satan’s world, we had to establish the realm for the liberation of women. To do so, True Mother had to stand in a position equal to mine.

True Mother had been in the position to just follow me wherever I went. She still needed to establish herself in the position of having perfected herself on the world level. In addition to having nothing to do with the Fall, by seeking to fulfill God’s Will, she had to reach the position where she and I could stand on the same plane.

She accomplished this, and therefore we could finally proclaim the liberation of women throughout the world. (Chambumo Gyeong Book 12:4-1-23, 1992.07.09)

A Position Equal To Mine

Mother shouldered a great responsibility when she had to stand on the front line for three years, from 1992 until 1995. She went on a speaking tour of 40 universities throughout Korea, connecting them to 40 nations in the world. They represented Cain and Abel centering on Parents.

Finally on the world level, Mother stood in a position equal with me. I had passed on all my victories to Mother. At the end of World War II the world did not welcome me but chased me out, but now in the second course for the dispensation of restoration the True Family was welcomed worldwide. (Chambumo Gyeong Book 8:1-5-5, 1996.01.01)

In 1992, on the foundation of proclaiming the liberation of women, I established Mother in the position equal to mine, so that we stood side by side. From that time on, I gradually handed over my authority to Mother in a process that continued for three or four years. (Chambumo Gyeong Book 12:3-2-3, January 2, 1997)