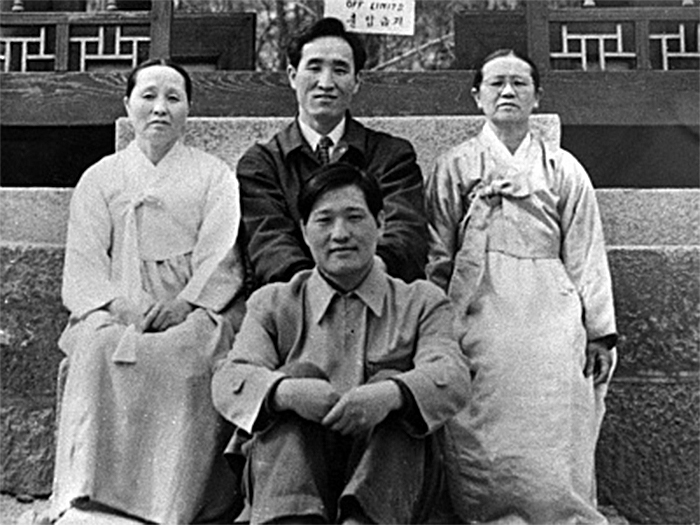 Jesus called Sun Myung Moon, the fruit of Christianity, qualified by nation, lineage, training and character, who appeared in the right place and time. The Holy Spirit prepared Hak Ja Han to have the same qualifications. On this foundation, they followed a path to fulfill Adam and Eve’s three responsibilities that, due to the Fall, became three indemnity conditions.

“After touching the hem of my garment, they felt like they were soaring.“

The return of Eve “There were 80-year old grandmothers who, guided by the spirit world, came to see me. …After touching the hem of my garment, they felt like they were soaring through the sky. They were so overjoyed, dancing all day long, that they even forgot to eat.”

Elder-younger sibling reversal “I offered bows to a three-year old boy. I attended him like I attend Heaven. …Having done that, I was recognized by God and the child praised me.”

Mother-son cooperation “In order to become the Returning Lord, [a man] must receive the blessing while standing in the position of the world-level Abel and the heir of the Messiah. But a son cannot bless the Messiah. Only a mother can do so. The only ones who can give birth to the Messiah are a mother and God. The Messiah is born through a woman, and for that reason only a mother and God can bless him. Therefore, a woman who is also the wife of God must appear. She must appear and testify that she can serve him as the Messiah. However, in order for the mother to give such a testimony saying, ‘You are my beloved child,’ the candidate for the Messiah must give her absolute obedience. …he must serve her in the role of a servant of servants. …Finally, after I had started by serving Mrs. Pak from the position of a servant of servants, our positions were completely reversed.”

” The only ones who can give birth to the Messiah are a mother and God. “

True Father said, “There had to be people who were even more prepared than I was.” Nonetheless, because Sun Myung Moon set these and countless other conditions, endless conditions, he is the only-begotten son.

To be the only-begotten daughter, True Mother also walked a miraculous path filled with corresponding conditions. We will look at that path on Monday.