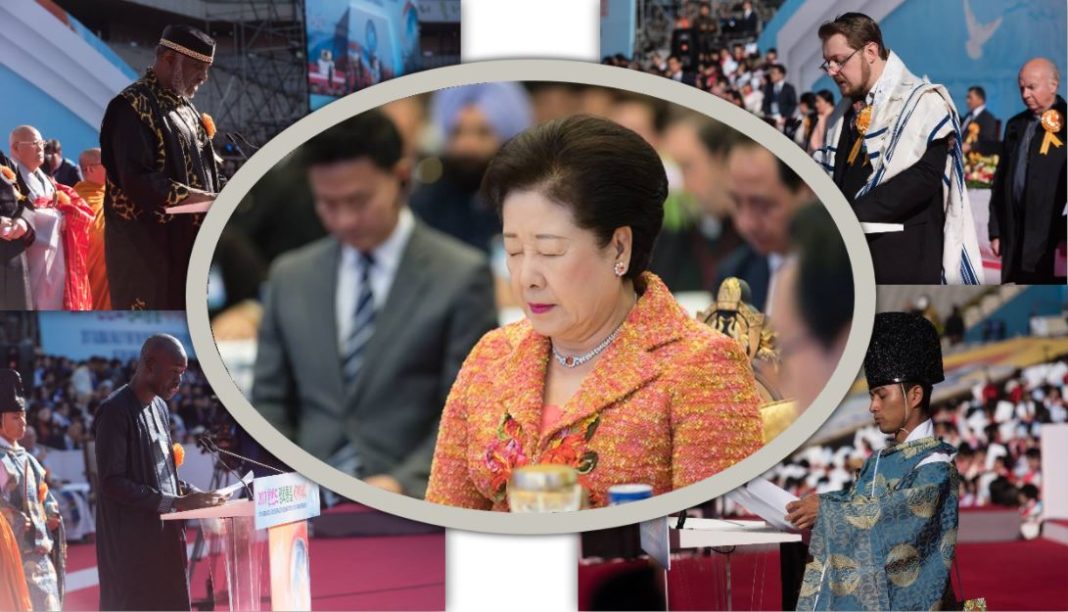 Our True Mother’s gathering of religious leaders at the World Cup Stadium was more than an interfaith event. She embraced political leaders; she spoke to governments. It was the launch of a global civil religion.

A “civil religion” embodies the spiritual life of a multi-religious nation. It unites a diverse citizenry through the nation’s shared symbols, rituals, values, events, prophets and martyrs. This week’s Thanksgiving holiday is a feature of American civil religion. Others are Memorial Day and Independence Day, the Presidential inauguration and the playing of the national anthem before sporting events. These connect citizens of all faiths to their nation’s transcendent ideals.

The world needs a civil religion, and True Mother presented it.

The world needs a civil religion, and True Mother presented it. To the political leaders, “the leading figures and nations Heaven blesses,” she said, “You need to take responsibility for the blessings you receive. They are not yours only; you can share them with your neighbors, other people, and the world.”

She called them to do so through the religious leaders, centering on True Parents, for “fallen humankind cannot go directly into God’s presence. The Blessing we receive through True Parents brings us into a state of rebirth and resurrection. Righteous leaders and members of the clergy have accepted the mandate and are putting the true family movement into practice in their churches around the world.”

Heaven’s blessings, she declared, will be eternal “Only when God’s providence unfolds, centered on True Parents and under the circumstances of each of us attending God in our family and nation.”

We need love that can realize the world of peace.

True Parents’ global civil religion interweaves the biblical creation story with the gospel of Jesus Christ, the paradigm of blessed marriage and family, the common origin and consummation of all religions, the role of America, and Korea’s destiny.

And it was spoken by a woman in oneness with her husband and his vision.

For he told us “We need an ideology which can unite all the religions, and then we need love that can realize the world of peace.”

One day before the Stadium event, inspired by “love that can realize the world of peace,” 400 religious leaders from throughout the world inaugurated the Interreligious Association for Peace and Development, partner to the International Association of Parliamentarians for Peace.

(Citations: “Civil Religion in America,” by Robert N. Bellah, http://www.robertbellah.com/articles_5.htm; Hak Ja Han Moon, “The Truth of History from the Viewpoint of Heaven’s Providence, and This Nation’s Mission,” November 11, 2017—the True Parents Way editing of the rough translation; Sun Myung Moon, The Way of Unification in God’s Providence, p. 85.)