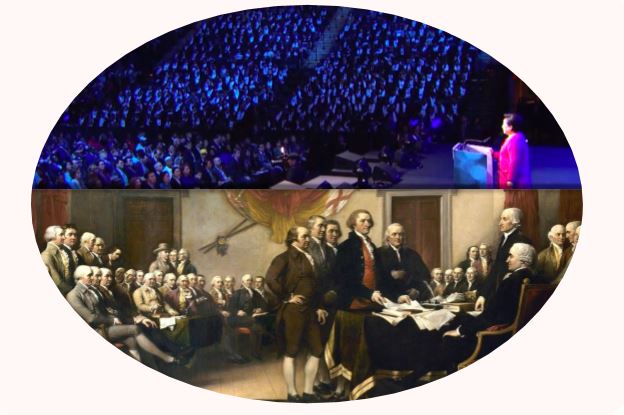 In her November 12-13 addresses, Dr. Hak Ja Han Moon rallied the gathered clergy around what is essentially the American political philosophy. Dr. Moon told them, “God raised this country as a democratic nation, which means that a single leader does not make the decisions, but that it considers the greater good and strives to have good policies and politics [in response to] public opinion.”

God raised this country as a democratic nation.

And she reminded them that the mission of the churches, mosques, synagogues and temples is to move public opinion in a godly direction and teach the leadership of each generation through the world scriptures.

Dr. Moon was repeating what the American founders said:

“No civil government of a republican form can exist and be durable in which the principles of [the Christian] religion have not a controlling influence.”

“The Bible is the best of all books, for it is the word of God and teaches us the way to be happy in this world and in the next.”

“Our Constitution was made only for a moral and religious people. It is wholly inadequate to the government of any other.”

“[T]he only foundation for a useful education in a republic is to be aid in religion.”

“The moral principles and precepts contained in the scriptures ought to form the basis of all our civil constitutions and laws.”

“Far from being rivals or enemies, religion and law are twin sisters, friends, and mutual assistants. Indeed, these two sciences run into each other.”

“Religion and morality are the essential pillars of civil society.”

The only foundation for a useful education in a republic is to be aid in religion.

Cheered on by her husband and the American founders in spirit world, Dr. Moon challenged the clergy: “you must educate this democratic country’s president.”

And she told them exactly the content of that education.

ABOUT US
Our Mission: To inherit and magnify True Parents’ love.
Our Vision: True Parents Way builds the vibrant unity of our ever-expanding global family through articles, podcasts, courses and videos.
FOLLOW US
© Copyright 2019 - True Parents Way. All Rights Reserved.
MORE STORIES
An Introduction to Dr. Moon

More Than a Head of State

True Father and True Mother are eternally one with the eternal God, centered on true love. They share rights of equal participation, equal authority...